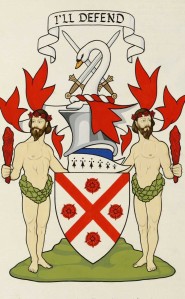 Arms of the Chief Clan Lennox

The Constitution of Clan Lennox

Edward James Hornell Lennox, heir to the Name and Arms Lennox, through his prerogative as Chief of Clan Lennox, proclaims this as the Constitution of those Lennox people across the world who would like to participate in an organization to promote the purposes stated herein.  The Clan will be subject to Scottish laws, if any, pertaining to clans, and the conventions, regulations and traditions of the Court of Lord Lyon.

Purposes.  The purposes of Clan Lennox are the following:

Incorporation.  Upon approval of the Council of Commissioners, a Clan society shall be incorporated as a not-for-profit corporation. Such incorporation shall take place in any constituent kingdom of the United Kingdom or any country, state or province that is a former Royal British Colony.  The corporate name will include “Clan Lennox” and a corporate designation required by the jurisdiction of incorporation.

Equal Opportunity.  Clan participation and decisions of the Council of Commissioners, international officers, and all governing officials of Clan Chapters and Divisions will be made without regard to sex, race, national origin, religion, age or disability.

2.     Members.  The Clan shall consist of all people with the Lennox surname and all people who are related by consanguinity to a Lennox.

3.     Septs.   Non-Lennox families with established organizations, whether formal or informal, may apply to the Clan Chief to become allied with Clan Lennox as septs.  Honorary septs are deemed full septs.  Members of Clan septs are permitted and encouraged participate in Clan functions, to represent the Clan at functions and gatherings, and to wear and display the Clan Tartan and other symbols of the Clan.

Clan Lennox Chief.  The Chief of the Lennox Name and Arms, as recognized by the Court of Lord Lyon, is the Chief of Clan Lennox.  The chiefdom is hereditary.  The Clan Chief under Scottish tradition, if not law, shall have the authority of a Scottish clan chief, and shall have authority over all Clan matters, but the Clan shall operate according to this Constitution as it may be amended.

Dues and fees.  General membership in the Clan shall not be conditioned on payment of dues or fees.  It is expected that in the first years of activity, administrative expenses of the Clan will be defrayed by voluntary contributions.  However, the Clan Chief, Council of Commissioners, and/or National Chapters and Divisions shall have the authority to charge reasonable dues to defray administrative costs, and, at a time in the future when election of a High Commissioner or the officers and representatives of a National Chapter or Division is permitted to the membership, voting may be limited to those members who pay dues.   Receipts from dues shall always approximate the administrative costs of the expenses of the Clan unit charging the dues and shall never generate revenues that will threaten the not-for-profit status of the Clan.  Fees to defray actual costs of events are always permitted. 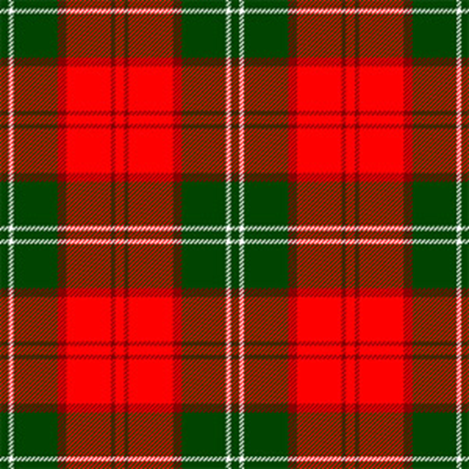 The Scottish Register of Tartans writes that the tartan is “ancient and distinctive” and that it was reproduced in 1893 by D.W. Stewart “from a ‘lost’ portrait of the Countess of Lennox dating from the 16th century.”

Clan Lennox Crest.  The Clan Lennox crest that may be displayed by members of the Clan consists of two broadswords in saltire behind a swan head and neck in the center of concentric circles with the Clan motto “I’ll Defend” within the top of the two circles. 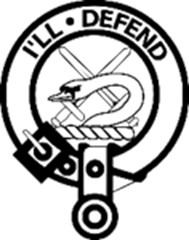 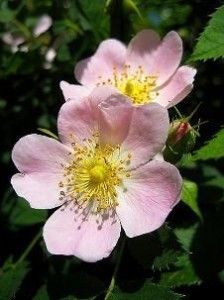 Clan Lennox Chief’s Arms.  The Coat of Arms of the Chief, as issued by the Court of Lord Lyon, is Argent on Saltire Gules cantoned of four Roses Gules.

Under Scots law, and the traditions and regulations of the Lyon Court, the arms are personal to the Chief and are not issued to the Clan.  The arms are set out in this Constitution in order for the Clan members to be able to recognize their Chief’s Arms.

Amendments.  This Constitution may be amended at any time by the Chief or the Council of Commissioners.

Exhortation.  This Constitution is issued with encouragement to all Lennox people across the world to promote the purposes of their Clan with special emphasis on goodwill among themselves and their neighbors.  While the Lennox name is ancient, each member is encouraged to lead a modern-day life that does honour to himself or herself, his or her family, and to the Clan.

IN TESTIMONY WHEREOF, this Constitution is hereby declared to be in full force and effect the 31st day of May, 2017.