The Scottish Register of Tartans writes that the tartan is “ancient and distinctive” and that it was reproduced in 1893 by D.W. Stewart “from a ‘lost’ portrait of the Countess of Lennox dating from the 16th century.”

An article published on the website of the Standing Council of Scottish Chiefs notes that Lennox Modern “has become the oldest tartan still woven today.” 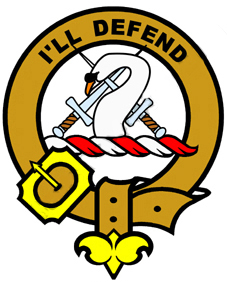 The Court of Lord Lyon issued a patent to Denis P. H. Lennox, the father of current Clan Chief, Edward J.H. Lennox, on 28 June, 1984 for arms and appurtenances, including a crest for Lennox.  The patent describes the crest as “two broadswords in saltire behind a swan’s head and neck all proper.” The crest, as the with the arms, are actually personal to the chief, but as his father’s heir, Chief Lennox has declared his crest to be the Clan Lennox crest.   “I’ll Defend” is the Lennox motto.

The above mentioned patent of the Lyon Court included an award of a coat of arms.     The patent describes the arms as “Argent, a saltire between four roses Gules.”  In its simplest form here is the depiction of the arms.

The patent also includes the arms and crest with beautiful artistic flourishes as this.

These renderings of the Lennox arms are, and remain, personal to the chief and are protected under Scottish law and custom as if trademarked.  The Chief has published them in the Clan’s Constitution in order that clan members may recognize the Chief’s arms.

Most Scottish clans have a plant badge.   The Lord Lyon recognizes the Lennox plant badge as the Rosa Canina (“Dog Rose”).